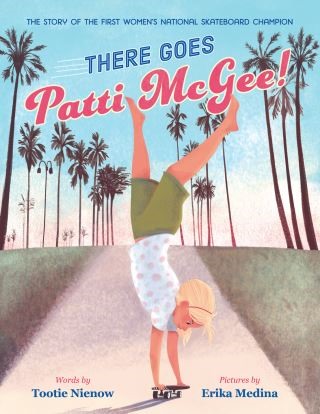 The Story of the First Women's National Skateboard Champion

Tootie Nienow's There Goes Patti McGee! is an uplifting picture book biography of the first-ever professional female skateboarder and winner of the 1964 National Skateboard Championship for Women.

Brought to life by Erika Medina's dynamic and joyful illustrations, There Goes Patti McGee! walks us through Patti first place win in the women’s division of the 1964 National Skateboard Championship. She wowed the judges with with what would become her signature move—the rolling handstand. Inspiring and unapologetic, Patti McGee proves that anyone can skate.

Tootie Nienow: Tootie Nienow has been a school librarian for ten years. Before that, she was a teacher, photographer, mother, social worker, and soldier. She loves sharing silly, scary, and suspenseful stories with her students. Although she has ridden a skateboard around her neighborhood, she has never once attempted a handstand. Tootie lives in Southern California with her husband and dog. There Goes Patti McGee! is her first picture book.